Regarded as Barcelona’s hottest neighbourhood, the historical barrio of Borne makes a superb base from which to explore the city, combining centrality with a charismatic authenticity. Brimming with chic bars, quirky boutiques, delectable restaurants and cultural hotspots, the district is simply bursting with Catalonian treasures. We provide a fantastic range of high quality accommodation within the quarter, offering the perfect Borne apartment for you and your companions.

Below you will find our most popular Borne apartments and a link to all apartments within the Borne area. 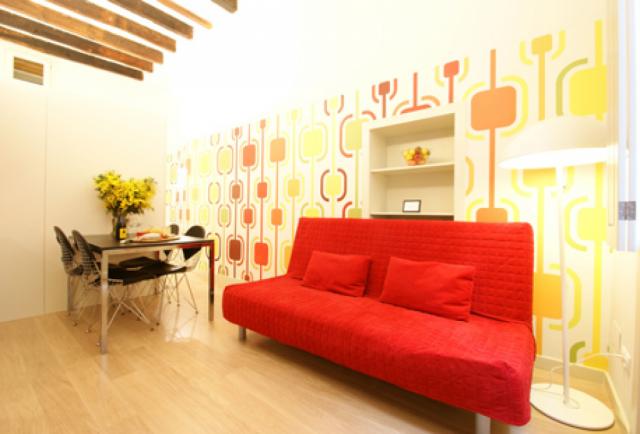 This contemporary and funky apartment is located in the El Born district of the Old City.
More about: Borne Pop Art Loft A Apartment Barcelona

Show all apartments in the Borne area

For accessing Borne from Girona Airport, simply follow these instructions:

For accessing Borne from Reus Airport, follow these simple instructions:

The nearest parking facilities within the area are:

The following supermarkets and stores are situated within easy reach of your self-catering apartment, allowing you to take advantage of home cooking. For a more relaxed alternative, let someone else do all the work and sample delicious cuisine from the selection of cafes and restaurants, each available within walking distance of our Borne apartments.

Known as perhaps the most artistic and fashionable neighbourhood in the city, El Borne or Born is certainly one of the prettiest. Nestled enviably between the atmospheric Gothic Quarter and one of the city’s most relaxing and enjoyable green spaces, Parc Ciutadela, the district boasts stunning architecture and has a unique effortlessly chic vibe. You will find some of the city’s most interesting art galleries and boutique stores as well as a multitude of delicious eateries including traditional Tapas bars. From violin makers to glassblowers and adventurous clothes designers’ shops to creative artists’ studios – you will find it all here. Enjoy getting lost in what seems like a never-ending labyrinth of alley ways and secret court yards and be surprised by the sometimes shocking mix of old and new design. With its safe, central and charming ambience, what’s not to love about El Borne?

Historically El Borne was once a thriving district in medieval times due to its close proximity to the port. It became home to many wealthy traders who built lavish palaces, some of which can be seen today on Calle Montcada. However due to a downturn in Mediterranean trade, the 16th century presented a financial crisis for the area. Filipe V went on to make his mark by destroying large sections of the neighbourhood in order to build a huge fortress. This area in later years was to become the delightful Parc Ciutadela we can see today. In the 19th century the city saw mammoth changes with the nearby new Eixample being created as a much needed residential area extension however after the 1929 Exposition El borne became extremely overcrowded and fell into decline. It was only in 1980 that the city faced a new chapter of real renovation and over the last 30 years the district has seen its fortunes completely turned around. Today the neighbourhood remains one of the most sought after locations in the city to live.

One of the most popular visitor attractions within the neighbourhood of El borne has to be the Picasso Museum at Carrer de Montcada 15. With more than 3,500 works making up the permanent collection you can see first-hand the artist’s genius. The museum also throws a fascinating light on his special relationship with Barcelona itself. Seemingly high on the must-see list of most visitors to the city it is wise to the check opening times to ensure you are not disappointed. Ticket prices are around €8.00- €10.00 although the museum offers free entry on the first Sunday of every month. Be warned however, the queues are guaranteed to be extremely long.

El Borne is home to several other remarkable museums including the excellent Textile Museum at the Marquesos de Liió Palace. This fascinating visitor centre retells the story of how the textile industry played its important role in rejuvenating the city’s economy in the 18th century. Also worth visiting nearby is the Barbier-Mueller Pre-Columbian Art Museum which boasts a broad selection of illuminating artefacts from pre-colonial Latin America. Meanwhile the most delicious museum in the country has to be the fabulous Chocolate Museum or Museu de la Xocolata at Comerç 36. The museum whisks you away on a historical tour back in time to discover the fascinating and fun origins of chocolate and its role as a medicine, food and an aphrodisiac. You also learn all about the manufacturing process of chocolate through the ages and there is of course a delicious museum shop. The museum may be quite small compared to more established attractions in the city however the fun element and obvious attraction to children will more than make up for this.

Barcelona is home to over 40 markets which offer everything from basic fresh foods to deliciously rare gourmet items. Whilst many visitors flock to the famous La Boqueria market located in the Ramblas area be sure to pay a visit to the newly designed Santa Caterina Market in the neighbourhood. From the outside it boasts impressive ultra-modern design whilst the roof carves an unbelievably colourful undulating form resembling a beautiful magic flying carpet from above. Amazingly inside it has cleverly retained the feel of a traditional Barcelona market. With over 60 unique shops, bars and restaurants you are sure to find something of interest here. With a wide variety of mouth-watering Catalan restaurants and typically traditional tapas bars to please your palate or quench your thirst, you certainly won’t leave the market feeling hungry.

Take a gentle stroll down Carrer Montcada which stretches from the charming 12th century diminutive Marcus chapel to Plaça del Born and admire the amazing mediaeval civic architecture here. This is the location of the city’s ancient palaces where rich aristocrats and merchants once lived. They are remarkably well preserved. The street became recognised as a location of artistic and historical importance in 1947.

The pretty Passeig del Born is a place for people watching. The cobbled courtyard is peppered with cocktail bars, tapas bars, laid back cafes and interesting trendy boutiques. This is most certainly one of the most fashionable parts of Barcelona.

Alongside you will find the beautiful basilica of Santa Maria del Mar. The name translates as ‘St. Mary of the Sea’ and it was originally the place of worship for the shipbuilders and merchants of Gothic Barcelona. It was built in just 55 years from 1329 to 1384 and it remains the only surviving church in the pure Catalan Gothic style. Its incredible towering height appears to almost defy gravity. The tall columns inside were a major influence on Gaudi for his design of La Sagrada Familia, the most eye catching building in the city.

To unwind after a long day out sightseeing why not visit the Baños Arabes, and experience an invigorating or calming Moroccan-style massage? Based on traditional Roman and Arabian traditions of public bathing within an incredibly beautiful underground cellar, you will find thermal baths set at a constant 36° C.  Alternate between the sweltering calidarium (40° C) and the nippy frigidarium (16° C) to get the blood flowing. You can find the Baños Arabes located at Passeig de Picasso 22.

El Born is served well by the excellent city metro system. You will find Jaume I (Yellow Line), Urquinaona (Yellow and Red Lines) and Arc de Triomph (Red Line) stations in the neighbourhood.

An area certainly worth exploring from one of our Borne apartments!

All of these fascinating attractions and many more are within easy reach of our Borne apartments.